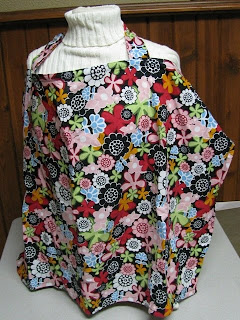 Since having three babies I've gotten pretty confident about nursing in public. Lucy and Julia were both persistent little ones and when they wanted to eat, there was no putting them off until later! I'm not sure if these nursing covers were around when I was nursing my other two, but I've been using one recently with Esther and its great. I don't have to search around for an out of the way corner to nurse in or worry about showing too much skin.

I received a nursing cover from Ecobuns.com to review. This is a new item to their store, made by a mom here locally. Ecobuns is a great little cloth diaper store run by a friend of mine right around the corner from my house. (Dangerous, I know!) I've been keeping the nursing cover in my diaper bag so that its handy when I'm out somewhere and need to nurse Esther. I've used it several times now, and I'm thankful to have it. The nursing cover has a stiff arch up at the neckline which is great. I like that I can see Esther and latch her on without trying to fumble with a blanket. The arch also helps Esther not get too hot under the blanket, and she can look up and see me. I love that I can nurse in public yet still have that connection of being able to see my baby. 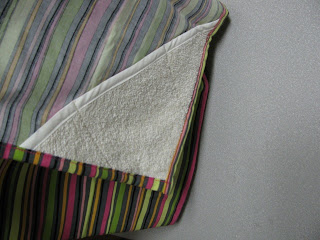 Some nice features are a terry cloth pocket on one side, and the adjustable D ring strap. The pocket is great for wiping a bit of spit up (although Esther spits so much at a time I don't bother to use this). The strap holds the nursing cover in place nicely. If I have to sit Esther up to burp her, the cover can be sort of pushed aside and then pulled back into place - unlike a blanket that falls off if the baby moves. The covers are available from Ecobuns in a variety of prints for $24.99.
Would you like one? Ecobuns is giving away the nursing cover pictured at the top of this post! Here are some ways to win:
- visit Ecobuns and tell me something they carry that you are tempted to buy
- follow my blog
- post about this giveaway on your blog linking back to this post and to Ecobuns
- become a fan of Ecobuns on facebook
Leave a separate comment for each of the entries above, being sure to include an email address. Good luck! I'll close this giveaway on March 29 at midnight. If you're new to my blog, take a look around. I have several other great baby product giveaways running this month. You can also click on the purple Prizey button on the right to see what is current. Thanks for stopping by!
*Giveaway closed. Comment #11 won!*
Posted by Christy at 6:57 AM