Last year, one of my kids was having some problems with constipation.  Actually, it was that big embarrassing word: encopresis, which basically means so constipated that poop was leaking out into her underwear frequently.  She was also having stomach aches on an almost daily basis.  We had taken her to see our chiropractor/ kinesiologist several different times.  The idea of trying a gluten-free diet came up, but I was always way too intimidated to try.  Finally, after one particular doctor visit I just knew we had to do something.  We got in the car to head home and I decided I couldn't give her the bunny graham snacks that were in my diaper bag.  I had no idea what I would feed her, but we would just have to figure it out.

Did I mention that I was 34 weeks pregnant with our fourth baby?  It wasn't the ideal time to try something new, but I didn't feel like we had a choice at that point.  In the beginning we relied quite a bit on store bought gluten-free products.  The other girls had "normal" food and Lucy had a gluten-free version.  After six weeks of this, we decided to take her off of dairy as well as gluten.  It wasn't until then that we really began to see improvements.  That also made the grocery shopping even harder.

Isaac was born and after a few weeks started to get really cranky and colicy.  One Saturday when he was three weeks old, I was making gluten free/ dairy free pancakes for Lucy and regular pancakes for the rest of the family.  I decided to eat Lucy's along with her, and began my own gluten free/ dairy free trial.  Isaac quickly improved, and after a while I figured out that I needed to eliminate soy as well.  (It would make him puke if I had even the tiniest bit of soy in something.)  There was such a dramatic change in him; I wish I had tried dietary changes with my girls when they were young!

It would be deceiving if I did not say that this was all extremely hard!  I cried many times because I had no. idea. what to make for dinner.  Being super vigilant about our diets, reading labels, not being able to eat out anywhere... it was all very challenging.  Somehow we kept going.  I searched Pinterest for recipes to try.  We found new favorites; I put together a new recipe binder.  I felt terrible telling my daughter that she couldn't have a cupcake or a french fry, but I did my best to come up with our own substitutes.  We make french fries at home, bake donuts in our special donut pan, and bring along cupcakes to parties when needed.  It also made it easier on her that I was gf/df too.

In January of this year I decided to go ahead and put Julia and Esther on a gf/df diet and just make our whole household gf/df.  I wanted to see what health effects it would have on them.  Esther had some severe dry skin bumps on her arms and legs (that have since gotten much better).  It is also easier for me to just make everything gf/df instead of trying to make two different versions.  Julia feels kind of important telling people that she is gluten free now too.

Which brings us to now.  Where will we go from here?  I don't know.  Its tough staying gf/df, and some days I just want to eat a piece of pizza.  Its slowly becoming our new normal though.  Members of our family have definitely seen health improvement with the diet, and as challenging as it is, I think its something we need to continue.  I still struggle with the ins and outs of this - should I let them eat french fries? or should I keep them strictly gluten free?  Lucy's stomach is still very sensitive.  She's had some episodes of throwing up after eating certain things.  We've not done any testing on her, although we have considered it.  Eventually we may experiment with adding gluten or cultured dairy back into our diets.  I'm thrilled that we've been able to meet the challenge so far and we'll just continue taking small steps from here.

Writing this post I realized that its been an entire year!  I never thought that I would be able to "go gluten free", let alone survive a whole year of it.  We made it through Christmas, family parties, holiday food, and more.   I am definitely still trying to figure this all out but later this week I will share some of our resources and favorite recipes with you.

Are you gluten free/ dairy free?  Just starting out?  Do you have questions for me about it?
Posted by Christy at 9:52 PM 3 comments:

Thanks, Pinterest for another super awesome easy craft idea!

The girls and I strung beads on pipe cleaners, twisted them into heart shapes, and linked them together.  Now our curtain rod is all ready for Valentine's Day.  :) 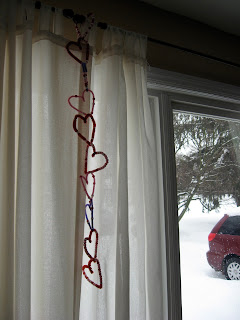 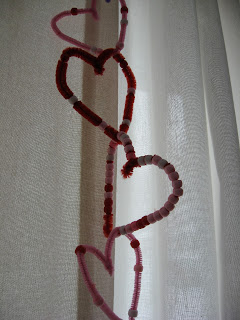 I already shared our rag wreath and the mailboxes that we are having a blast with.  Today I whipped up these adorable kitchen towels and finished a wall decoration.  Ok, I didn't whip them up, they sat on my table for two weeks until I finally had time to sew them...

I used ribbon that I had on hand and fabric left over from the wreath.  The towels are actually fluffy bathroom hand towels that I picked up at Meijer for $3 each. 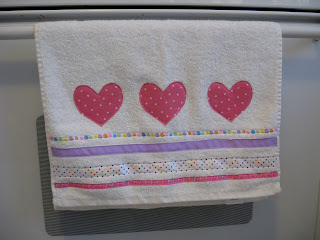 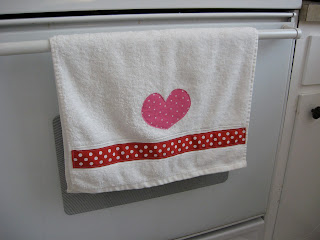 Our wall decoration turned out more Mickey Mouse-ish than Valentine's-ish.  Oh well.  The kids like that it has their names on it; I like that it contributes to a sense of family and togetherness. 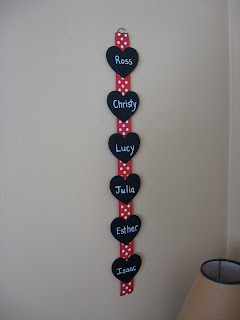 We used 29 cent wooden hearts from Hobby Lobby, black acrylic paint, a white paint pen, and a spool of ribbon.  The ribbon is hot glued around a D ring at the top for hanging.  I let the girls help paint the black, and considered letting them write their own names.  Only Lucy and Julia are old enough to do so and I thought it would look odd with my handwriting on all of the rest so I decided against that. 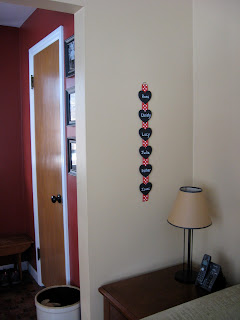 I'm enjoying decorating our home for Valentine's Day and the kids are excited about these special touches.
Posted by Christy at 5:43 PM No comments:

We are having a blast with these Valentine's Day mailboxes: 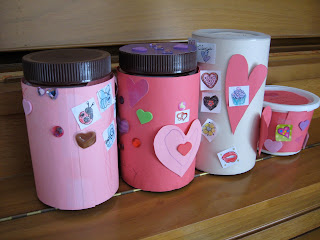 The girls created them on the last day of January.  Every day since then, they've woken up to find little love notes tucked inside.  They've been busy cutting out hearts and secretly stashing love messages in each other's jars as well.  Grandma and Grandpa even gave me an envelope full of valentines that they already signed, to dole out to the girls.  So far I've given simple cut out hearts, a sucker, a quarter, leftover Winnie the Pooh Valentines from last year, etc.  I think I'll write some secret messages soon.  I love spreading the love out over the beginning of February like this!  The little tub on the end is mine and it is already full of precious little hearts and drawings and love.  :)
Posted by Christy at 11:22 PM 1 comment:

I am very picky about what goes in my baby's mouth.  We have a fun selection of natural wooden or safe plastic toys that Isaac gets to play with and suck on.  Everything else is a no (well, except for the random pinecone or fuzz that he finds and decides to eat). 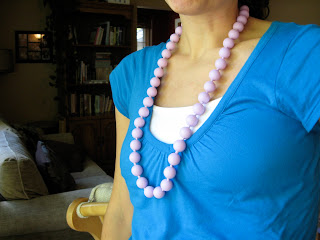 Of course if I am holding Isaac, where does my necklace go?  Straight to his mouth!  Chewbeads are a fun safe option that I like to wear.  The necklace is made of silicone (similar to a pacifier).  It also has a break-away clasp so that if he tugs on it too hard it will come apart rather than breaking and spilling beads everywhere.

Chewbeads are tested and free of BPA, phthalates, PVC, lead, cadmium, and heavy metals.  Many everyday pieces of jewelry are NOT safe!  Scroll halfway down this page to see some test results on jewelry that moms sent in.  There are sooo many recalls for lead in children's jewelry each year as well.

Chewbeads come in fun colors and different styles.  I'm wearing a Jane style in Violet.  :)  I love that I can be a mommy, snuggle my little one, and not have to worry about my jewelry breaking or being toxic.

I was sent the above necklace for purposes of review.  Two thumbs up from me and Isaac.  Thanks Chewbeads!
Posted by Christy at 10:13 PM No comments:

I made this adorable fleece scarf for Esther in about 10 minutes today! 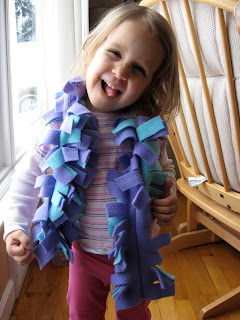 Lucy and Julia both want one; I think this will be their next sewing project.  Must be something about three year olds that makes them pose crazy for the camera...
Posted by Christy at 8:31 PM No comments: