If you haven't already, you'll want to go read Story Number One and Story Number Two before you read this one. I also wrote a post with some of my Thoughts on Home Birth a couple of weeks ago. So, Story Number Three begins... 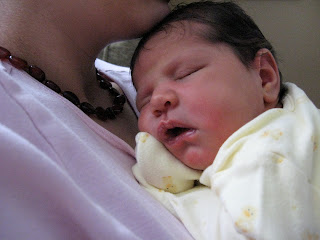 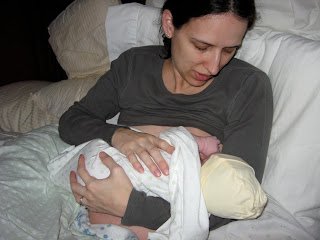 I moved to the bed and held Esther and nursed her for a bit. Yolanda checked her over and said she was perfect. She weighed 9 lbs even and was 20 1/2 inches long. She had been born at 9:28 am, just one hour after my water broke, an hour and a half total of labor. I had only been in the tub about a half hour before she was born. It was amazing to feel my body push her out, to reach down and feel her soft head. Even though the contractions were incredibly painful and intense and I was worried about Yolanda arriving in time - when I realized that I was pushing, I was amazingly peaceful. I only tore very slightly (although I did end up with a very sore bottom that took quite a while to heal up). 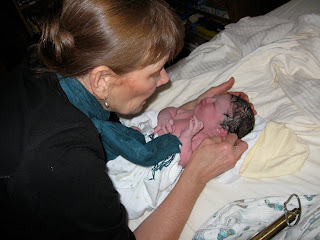 For the next few hours Yolanda was there writing up the birth paperwork and checking on Esther and I. We eventually called Lucy and Julia at Grandma's house to come meet the baby. We didn't tell them it was a girl until they arrived and met her. They were both thrilled to have a baby sister. Ross and I were both kind of in shock for the next couple of days - amazed that we had a healthy new baby girl and trying to process the crazy birth events. 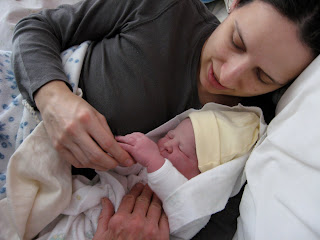 Esther Joy is beautiful. She came out with a head of dark hair quite unlike her sisters. She is a calm little one and has already smiled a few times in response to Mommy and Daddy talking to her. She turns her head to find her Daddy when she hears him talking. We are in love with her and in awe. Welcome to our family, little one. We love you!
Posted by Christy at 9:46 AM