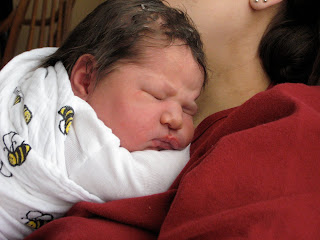 Nursing my girls through the first couple of weeks has proven to be one of the hardest things I've ever done. Lucy and Julia both had trouble latching on correctly and ended up using a nipple shield. Lucy used the shield for the entire 22 months that she nursed. Julia weaned from it at six months and then nursed without it until 23 months when she weaned. Esther is using a shield for now too.
She is having trouble opening her mouth wide enough, keeps her tongue back in her mouth too far, and sucks on her lips when she latches on. My nipples are cracked, sore, bloody, and torn. I have scabs that get torn off when she nurses. Someone telling me that the baby wants to nurse is like saying "Ok, time to slam your nipple in the door." The pain when she latches on is that intense. My whole body tenses up and I want to scream. The shield helps her tongue not to scrape on my sore nipples, but nursing still hurts quite a bit.
I'm using a variety of things- moist burn pads, Earth Mama Angel Baby nipple butter, vitamin E capsules, breast shells, heating pads, simple tongue exercises, and working hard on proper latch. I've talked with my midwife and La Leche League leaders several times. There have been lots of tears, and I've considered which brand of formula I would tell Ross to buy and wondered how we would afford it. If I can't latch her on any more, my next plan is to try pumping and feeding her my milk in a bottle until I heal up.
On Friday, Esther was a week old and it was Ross' first day back to work. Thankfully I had help here with the girls because I ended up calling him in tears with chills, fever, dizziness, and breast pain. I developed mastitis and have been on bed rest this weekend with a routine of vitamins and lots of fluids. Engorgement combined with Esther's poor latch and scabs blocking the milk flow led to the infection. I'm feeling slightly better today and still just working hard on getting her to latch right. Esther is a sweet, content little baby and I know we can figure this out.
Why am I sharing all of this? I don't know, just being honest I guess. Nursing can be hard work. I'm sticking it out because its the best thing for Esther.
Posted by Christy at 3:15 PM